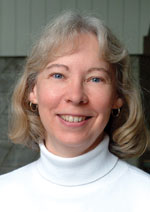 During transcription elongation, RNA polymerase II becomes arrested at specific DNA sites in vitro. Arrested polymerases can be induced to resume transcription by elongation factor SII. Study of the mechanism by which SII relieves arrest led to the discovery of a nucleolytic activity of the RNA polymerase/SII complex. The relationship between this activity and the mechanism of transcriptional arrest and readthrough is being investigated by both biochemical and genetic methods. In addition, other possible functional roles for the nuclease activity (e.g., proofreading) are being explored. We have used a genetic screen in the yeast Saccharomyces cerevisiae to identify RNA polymerase II mutants with reduced nuclease activity. We have also identified RNA polymerase variants that are defective for termination or have reduced accuracy. We are using these altered polymerases to investigate how RNA polymerase II coordinates and regulates its various enzymatic activities.

Chromosomal DNA is under constant attack from environmental agents and endogenous reactive chemical species. The capacity to recognize and repair the resulting DNA damage is essential for cell survival. The consequences of unrepaired DNA damage in somatic cells include cell death, tissue degeneration, aging, and oncogenesis. Unrepaired damage in germline cells can result in deleterious mutations. Transcription-coupled repair (TCR) is an important DNA repair pathway that targets bulky DNA adducts, such as the cyclobutane pyrimidine dimers caused by UV irradiation. These lesions are repaired first in the template strands of actively transcribed genes. The asymmetry of this repair pattern is due to the preferential targeting of repair enzymes by RNA polymerases stalled at DNA lesions. We have found mutant versions of yeast RNA polymerase II that reduce the effectiveness of TCR and we are using these mutants to investigate the role of the RNA polymerase in this important repair pathway.

A number of cellular proteins assemble with RNA polymerase II at promoters. One of these, the TATA-binding protein (TBP), is an unusual DNA-binding protein in that it binds within the minor groove of the DNA helix. TBP also bends the DNA upon binding. Analysis of the binding of TBP to a number of different sequences has shown that the affinity of the TBP-DNA interaction and the apparent bend angle of the complex are directly correlated with transcriptional activity. We are using a variety of biochemical and biophysical methods to characterize the TBP-DNA interaction and the association of the TBP-DNA complexes with other transcription factors.